The Hachiko statue is one of the most visited monuments from the great story of Hachi himself. One of Hachi’s Special Friends, Sira Sudhindranath, who we call “World Wide Hachi Ambassador” took a group of 12 families and 17 dogs to visit Hachi’s statue at the train depot in Woonsocket, Rhode Island.

They call themselves the “I Luv my Coton de Tulear” group. The Blackstone Valley Tourism Council Members kindly hosted the group who came from California, New York, New Jersey, Rhode Island, Massachusetts, Connecticut, and New Hampshire just to see the Hachiko statue and the very place where Hachi: A Dog’s Tale was filmed.

They were welcomed by Oscar Hancock of American Beauty Signworks of Woonsocket and Donna Houle of the Blackstone Valley Tourism Council. 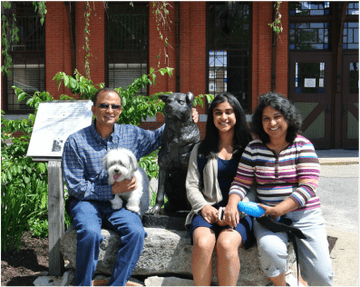 Visiting the Hachiko Statue was a Must

After seeing “Hachi: A Dog’s Tale” in late 2013, Sudhindranath was curious to see which real-world town was chosen to portray the town of “Bedridge” where the film story took place.

Using Google and Bing Maps, he located the train depot at Woonsocket and other film locations. Along with help from the Blackstone Valley Tourism Council, he gathered a group of dog-lovers and their dogs to visit the film location.

They walked in Woonsocket, which follows movie site locations from the film. The popular trail (www.facebook.com/thehachitrail) was designed by Sudhindranath and the group walked their dogs, learned about the history of Woonsocket, enjoyed lunch at Palace Pizza, followed by hot dogs and coffee milk (the official state drink of coffee syrup and milk) from New York Lunch at Market Square. 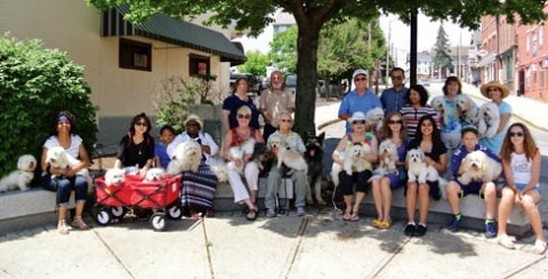 The “I Luv my Coton de Tulear” group love Hachi!

“The weather was good and we all had a very enjoyable tour of the movie locations, plus some excellent food,” said Sudhindranath.

Many Hachi fans have followed the Hachi Trail that was so generously mapped by Hachi’s Special Friend.

If you have a chance, it’s a lovely visit to a charming town with many warm memories along with this impeccable Hachiko statue! Be sure to say hi to Donna Houle at the train depot. She was present during the entire shoot and has many stories. 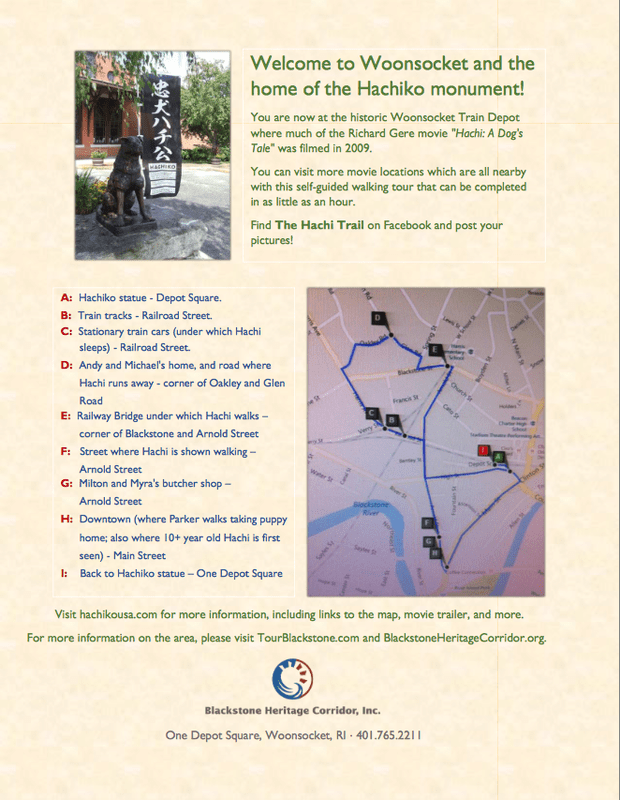 Great to see you and your group connecting with the Hachi spirit. I first saw the film a year ago it’s had a profound effect on me.
I’ve seen the movie 15 times and given it to about a 12 friends. I can’t seem to get enough scraps (pun intended) of information about the story, the cast, Akitas, etc.
I plan to visit Hachi in Woonsocket and possibly Shibuya someday. Thank you for sharing your visit with us.

Thanks for posting this. Here is the “Hachi Trail” that I designed – a tour through all the Hachi movie locations in Woonsocket.
The Blackstone Valley Tourism Council has created a
1-page handout of the tour and placed it on their Hachi website – http://hachikousa.com/guide.pdf

Sira,
This was a real labor of love, and I’m sure those of us who are fond of the story appreciate it so very much. I hope to one day be able to visit Woonsocket.
Thank you,
Ellen

Thanks Ellen. When you visit Woonsocket, don’t forget to dine at the New York Lunch diner on Main St. The moving “old Hachi” scene which shows the 10+ year old Hachi walking slowly, was filmed right in front of that diner.

FYI, the backdrop for the group photo shows Arnold St., which was used in a lot of scenes in the movie. On the left side of the road, at the next intersection (w/ Sayles St) is the location of Milton and Myra’s butcher shop. Along the right is where Parker walks up the road on the night he takes puppy Hachi home for the first time. And in the distance (where the large pine tree is) is where Hachi is later shown walking when he makes a trip from the station to the butcher shop.

Thanks, as always, for bringing to life all those memories!

Loved the movie and town. Hope to visit Woonsocket some day.