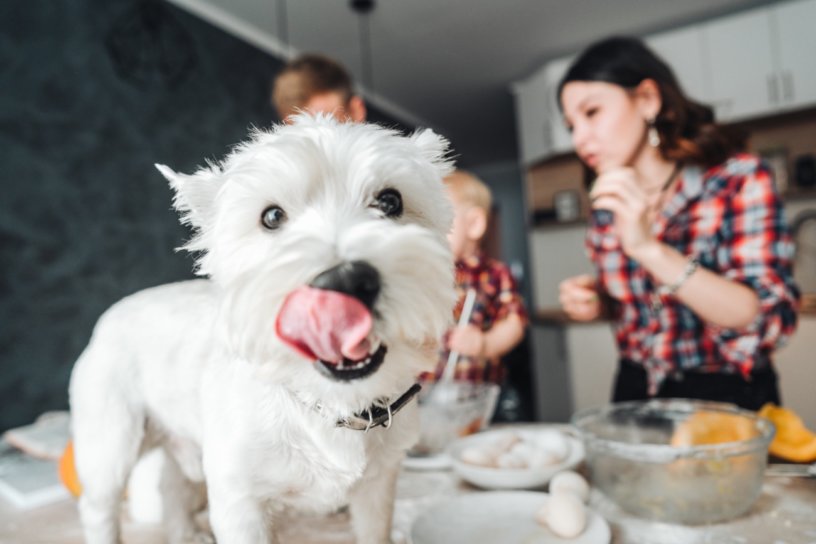 I would wave it in front of him, then quickly pull it away when he tried to bite. After a while, he’d pretend to not be interested and look away. As soon as I placed the toy close to him, he’d turn around and snap at it! Sometimes, he tried to peek from the corners of his eyes. If he saw I was looking, he’d quickly look away.

Ho-hum, who’s interested in a little toy? Not me… Hachi always had a strategy.

You might think you have an Einstein of a dog… or maybe their talents lie in areas other than their smarts. That’s OK, we love our dogs anyway!

But how developed are our dogs’ brains, and can they use them for deception? It’s a really interesting question and dives deep into canine behavior and cognition.

An experiment at University of Portsmouth looked at a dog’s “theory of mind.” Theory of mind is a developmental milestone. It’s used for children too. It indicates how separate we understand minds to be.

A fully developed theory of mind understands that each individual sees the world from a different perspective, both literally and metaphorically. Very small children believe that everyone sees, thinks, or experiences the same as other people. In humans, theory of mind develops over the first five years of life. But what about dogs?

The researchers at Portsmouth devised an experiment. Would the pups understand that their human wouldn’t be able to see them in the dark? Moreover, would they use the darkness to sneak food that was forbidden to them?

While the owner’s away…

The experiment went like this — the dogs and their humans were placed in a room with some food. The owners didn’t allow their dogs to take the food, and they mostly obeyed. But when the lights were turned off, the dogs were four times more likely to take the food.

Even more complex, the test then used two light sources — one lighting up the owner and one pointed towards the bowl of food. Could the dogs make the distinction between “I can see my owner” versus “My owner can see me”? Yes, they could! Dogs were more obedient when the light was pointed on the food, and more likely to steal when the light was pointed to their owner, but not the food. They understood that the key to their stealing success was whether the food was lit up or not.

It shows that dogs are aware that what they see is different from what we see. And that they were willing to use this to their advantage and break the rules!

As owners we know that when we are training our dogs it’s a whole new level to ask them to stay, for example, once we leave the room or look away. This means more intense training. The dog might think the instruction no longer applies if you aren’t really paying attention.

Another interpretation is that your dog moves or disobeys deliberately so that you will focus on them once more — it’s a way of capturing your attention, which is what your dog loves most of all!

Another fascinating and complicated study attempted to show whether dogs could “lie” or deceive people for their own self-interest.

Once the dogs understood the rules of the game, they misled a person 80% of the time in order to get their preferred outcome — their favorite treat.

They deliberately changed the behavior they had been trained on to skew the outcome in their favor and win a treat. It’s very cunning, and also a bit impressive!

It’s more harmless self-interest than deceit — the pups were smart in thinking through the issue. All that was at stake was a biscuit or bit of sausage. And they were deceiving people they thought were selfish and disliked — not their owners or people they liked. It just shows how smart dogs are that they can manipulate a situation. In addition, they are great judges of character and won’t hesitate to one-up someone they don’t like!

Getting into the mind of your dog

There are programs like Dognition, by Dr. Brian Hare, that allow you to test your dog in a similar way, and learn more about dog cognition. Dr. Hare runs fascinating courses that I’ve taken myself. The courses give you a new insight into your dog and their tendencies. Are they driven by sociability, how independent of mind are they?

Exercises and games will help you assess how good your dog is at problem solving or how well your dog understands the physical world.

Playing games that challenge your dog’s brain and senses is great fun for them and for you. It’s stimulating, interesting and a great way for pups to learn new things. It’s also a lovely chance to spend some quality time together, and to get an insight into how their charming canine mind works!

Although some of these tests show your dog can be cunning, they still have a wonderful purity of heart. They might pull some tricks to get extra treats but other research shows that most dogs prefer praise, petting and interaction from their owner over treats.

Loyal, Fun and Smart: Dogs have it all!

It’s heart-warming to know that your dog craves you most of all. In return, our furry friends are loving and dedicated, none more so than the loyal dog Hachiko and the film Hachi: A Dog’s Tale.

Just like Hachi, dogs can be mischievous and cheeky, which is all part of their charm. Their zest for life and joy is infectious. Sometimes that involves a bit of cunning in the service of getting their favorite treat. But it’s just evidence of how smart dogs are and how much they understand humans.

Dogs have a lot to teach us and it’s those lessons that we are bringing to you – on our blog and across the site. To reconnect you to what is important in life – Hachi can help in your journey. How does your dog see the world differently, or perform tricks for a treat? Leave your story in the comments!