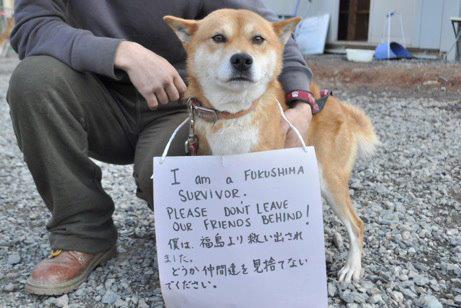 Responding to the pleas from desperate animal owners, Hiroshi Hoshi and Leo Hoshi helped rescue over 200 animals that were lost and “left behind” during the devastating tsunami in Japan two years ago.

​During these efforts they witnessed the dire conditions of animals trapped inside the protected exclusion zone. On January 28th, the Hoshi’s were placed in custody at the Futaba Police station.

To lend your support  for the Hoshi’s, you may sign the petition at:
https://www.change.org/petitions/free-hiroshi-hoshi-and-leo-hoshi-fukushima-animal-rescuers

On behalf of the Hachiko Animal Federation, Inc, a non-profit organization in the United States we humbly request that you release the Hoshi Family, Hiroshi and Leo on their own merit and without any bail.

The Hoshi’s have actively rescued, cared for and placed animals in adoptive families for almost two years. Because of the unforeseen disasters in Japan, unfortunately, many of these animals were sadly left behind in the Fukushima Exclusion Zone, or Nuclear Zone. It appears that there were no plans in place to deal with such drastic human circumstances and much less to include the animals that were people’s household pets.

The Hoshi’s have actively rescued over 200 animals on their own with very limited monetary resources. The Hoshi Family is a humanitarian group and their sole mission has always been and remains one of altruism; to help reunite animals with their families or to find new families for animals in need.

The Hachiko Animal Federation was formed to honor your national treasure and our mascot, Hachiko, the loyal Akita dog. Our mission was and remains to assist animal shelters in Japan as well as animal rescue groups and volunteers who received little or no aid from the Japanese government. Our group will continue to assist Fukushima animals and animals around the world.

Your Honor, we ask that you take into account that the Hoshi’s were saving animals lives and they would not have become involved if the Government of Japan had only rescued and shown mercy to its animals left inside the Fukushima Exclusion Zone. We ask that you release Hoshi Hiroshi and Leo Hoshi as quickly as possible.

​For almost two years, the Hoshi Family has acquired a very large network of supporters in Japan, in the United States and internationally who are so grateful for all of the animals that they have been able to rescue, obtain medical treatment for, spay and neuter and, in the best case scenario, find homes for as well. These “happy endings” are something we all want.

Surely, the Government of Japan would like this for the animals as well. We love Japan and hope that your great nation will rebuild and prosper. We would also like to tell our children and the world, that Japan did their best to help rescue animals and help the animal rescuers. We have asked the Ministry of Environment and the Fukushima Prefecture to rescue the surviving animals. To this day our request remains the same.

Your Honor, please take into account the fact that the Hoshi Family’s goal was to save lives. They wanted nothing more then to end the suffering of the cats and dogs they encountered. Animal owners begged for them to go in to the Zone and try to save their animals. Once there, it was impossible for the Hoshi Family to leave without trying to help all of the animals that they saw. These volunteer animal rescuers are not criminals. They are humanitarians who love both people and animals and could not stand to see animals suffering. Please do all you can to release Hiroshi and Leo Hoshi as quickly as possible. Their families need them and so do their animals.

We cordially thank you.

I will be signing the petition, thank you for bringing this to us, Hiroshi and Leo should never have been taken into custody for their humanitarian work, instead they should have been given help.
Everyone that follows Hachi here, please take time to support this.The animals in the zone still need help.
Thanks once again Vicki for posting this.