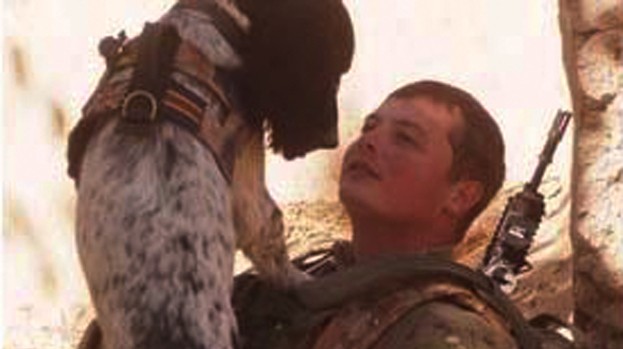 LONDON–Liam and Theo were a team, fast friends doing a dangerous job — searching out roadside bombs laid by insurgents in Afghanistan. The jovial British soldier and his irrepressible dog worked and played together for months, and died on the same day.

One brave, loyal dog dies shortly after his teammate, and friend, passes away.

On Thursday they came home, flown back to Britain in a somber repatriation ceremony for the soldier remembered for his empathy with animals and the companion he loved.

Lance Cpl. Liam Tasker, a dog handler with the Royal Army Veterinary Corps, was killed in a firefight with insurgents in Helmand Province on March 1 as he searched for explosives with Theo, a bomb-sniffing springer spaniel mix. The dog suffered a fatal seizure hours later at a British army base, likely brought about by stress.

Military officials won’t go so far as to say Theo died of a broken heart — but that may not be far from the truth.

“I think we often underestimate the grieving process in dogs,” said Elaine Pendlebury, a senior veterinarian with animal charity PDSA. “Some dogs react very severely to their partner’s loss.”

She said it was not uncommon for pets to respond to an owner’s death by refusing food and becoming sick — and the bond between working dogs and their handlers is especially close.

“The bonding that I have seen between soldiers or police and their dogs is fantastic. When you see them working together, it’s really one unit.” 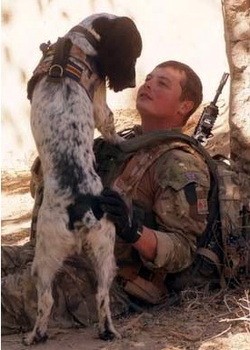 There are calls for Theo to receive the Dickin medal, which since 1943 has recognized wartime bravery by animals, from carrier pigeons to a World War II commando collie.

The loyalty of some dogs is legendary, from Greyfriars Bobby, a 19th-century Skye terrier who guarded his master’s Edinburgh grave for 14 years, to Hachiko, a Japanese dog who awaited his owner’s return at a train station every day for years after the man’s death. Both are commemorated with statues.

Tasker’s uncle, Billy McCord, said the soldier had been due to leave Afghanistan soon and worried about being separated from Theo.

“He actually said at one point that when he finished his tour he was not sure what would happen to his dog and that he could be separated from his dog,” he said. “That was preying on his mind, but they are not separated now.”

Although this loyal dog died, his bravery and love for his partner and friend will forever live on, much like Hachiko’s true story of devotion.

I watched the movie Hachi…so sad! I raised my miniature poodle Austin from a puppy. He was my therapy dog. We were together 24/7. I even had permission to take him into the local library to get on line. Austin would quietly be in my lap. Yes he was a lap dog. If I was sitting somewhere he was in my lap. At age 5, healthy, very active, very attached to me-my niece was working long hours and asked if Austin could come and play with her dog Henna for the work week. I took Austin Monday evening, she said… Read more »

Sometimes, when you least expect it, life brings a