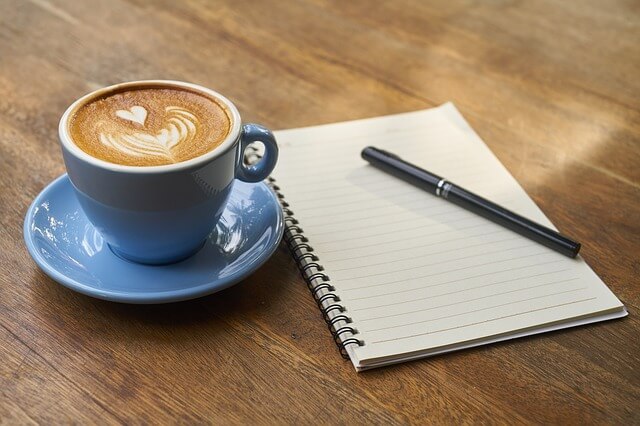 An Italian girl’s devotion has become part of Japan’s long adoration of its most famous and loyal dog. Ten-year-old Stephanie watched “Hachi: A Dog’s Tale,” and began writing a series of notebooks about Hachiko’s true story.

Stephanie, now 15 and a resident of Bergano in northern Italy, is devoted to keeping the memory of Hachiko’s true story alive.

Through online research, she discovered that Kazuto Ueno, 77, a grandson of professor Hidesabuto Ueno lived in Tsu, Mie Prefecture. Stephanie sent messages to the government’s Multicultural Affairs Division seeking to connect with the professor’s grandson.

The letters were translated to Japanese and forwarded to Ueno. Soon after, Ueno and Stephanie began corresponding. 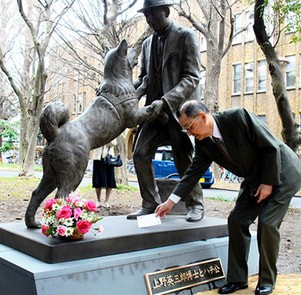 On March 8, the 80th anniversary of Hachiko’s passing, a statue featuring Hachiko and his owner Hidesaburo Ueno was unveiled at the University of Tokyo.

After the ceremony, Ueno, the grandson of Hidesaburo, placed a letter with words from three of Stephanie’s notebooks:

“Dear Hachi, Eighty years have gone by since you were called to heaven to be with your beloved master, but I am sure you are still close to us”.

Ueno was so moved by the young fan’s devotion to Hachiko’s true story that he placed similar letters at the Hachiko and Ueno statue in Tsu and the bronze Hachiko statue at Shibuya Station. 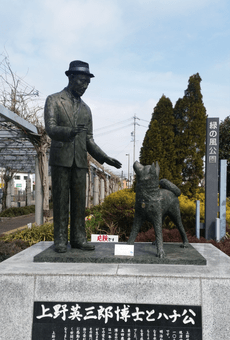 “I have read so many things about how special you are: strong and dignified, pure and gentle, peacemaker among dogs. With lots of love,” wrote Stephanie in one of her notebook passages.

Hachiko’s True Story is Beloved by Her Mother, Too

Stephanie’s mother is an avid Hachi fan and always has the latest updates on anything Hachi related.

I call her one of “Hachi’s Worldwide League of Friends”.  She writes,

“My daughter and I continue to love him as much as ever and when it came to choosing a subject for her end of school mini-thesis, Stephanie had no doubts at all, it had to be her furry best friend!  We managed to contact Dr. Ueno’s descendent in Japan and he wrote us some lovely letters. 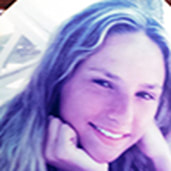 One day a journalist from the Asahi Shimbun went to interview him for an article before the 80th memorial anniversary and Mr. Ueno told him all about Stephanie and her love for Hachiko. We were then contacted by this journalist, who wanted to write an article about it all and was kind enough to take a symbolic little letter from Stephanie “to Hachi”, and this was placed on the New Statue by Mr. Ueno on the day of the ceremony. He then sent us a photograph of that moment and Stephanie almost cried with happiness!!

It is indeed a strange story, and Stephanie is convinced that it is Hachi who is working his magic after so many years as indeed we have met some amazing people through all this and have been impressed by the kindness of Japanese people.”

Stephanie and her mother hope to one day visit Japan, and personally say “Hi” to Hachi!

Professor Ueno’s grandson wrote to Stephanie, “Hachi kept waiting for his owner, so he must be waiting for you forever.”

“Stephanie was at high school and wrote to Mr. Ueno as she was writing a thesis on Hachi and his legacy. Almost ten years have gone by since then but it seems like yesterday!”

“Most people imagine Stephanie to be younger than she is. A long time passed between her original letter to the Mie Government Office and the arrival of Kazuto Ueno’s letter before the unveiling of the new statue. I think it was the reporter, who found out about 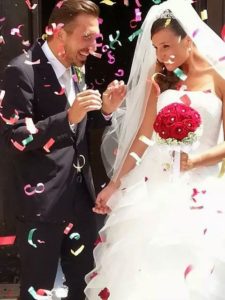 Stephanie with her husband

Stephanie during an interview with him prior to this event, that convinced him to be a part in the story…in any case it was a wonderful experience.”

“Stephanie is now married and works for an airline company in Milan, but Hachi still remains firmly in her heart! She travels abroad regularly attending courses aimed at improving customer service techniques.”

Anastasia and her daughter Stephanie are loyal Hachi friends, and we’ve corresponded for years. They would update me on Hachi happenings around the world.

To keep his legacy strong, Anastasia created the popular Facebook page called Hachi & Friends. When I received Stephanie’s gorgeous wedding photo, I was in shock. In my mind, she was still that young girl who was crazy about Hachi!

Isn’t Hachiko’s true story touching in almost every way? Not only is he connecting all of us through loyalty and inspiration, but even through our own devotion to him!

Wonderful! Here is a link to a different picture of the statue at Tsu – This is a wonderful post. This is a proof that Hachi’s life did not end 80 years ago. His legacy continues and he is significant in today’s fast changing world. We take a slow down sometimes, wait and never lose hope. Long live Hachi.

Here is another recent article about the P&W Railroad and Woonsocket train Depot that talks about Hachi:
http://www.providencejournal.com/article/20150328/NEWS/150329244/?Start=2

Hai all,
I just want to know how to buy or get The Pawprints in Japan book, because i lived in Jakarta Indonesia. I love Hachi and his story, very2 touch my heart and make tears flow.. Hope oneday i would have one akita”s inu like Hachi in my house. I deeply believe that Hachi is angel….My pray always for you, Dear Hachiko

I weep every time I watch this movie and as I read this amazing article confirming my belief that God is demonstrating The miraculous truth of His unconditional love through the heart of Hachi. I’ve never been a “dog” girl. I’ve always had kitties all my 70 years of life. But Hachi’s story makes me want to share my home with an “Akita Inu”. I thank and praise The Lord for this magnificent tale of love and loyalty.

Hachiko is the most moving films that I’ve ever seen. I’ve see the movie 20 times and gave it to 15 friends. The last time I saw I came away with a different interpretation. Hachi isn’t just about love and loyalty Hachi represents death which from a Buddhist perspective is our best friend and like Hachi always waiting for us.
How is Forrest doing?

Hi Peter!
I contacted Forrest’s breeder for an update. I’ve added a new blog post about him. Thanks for asking!