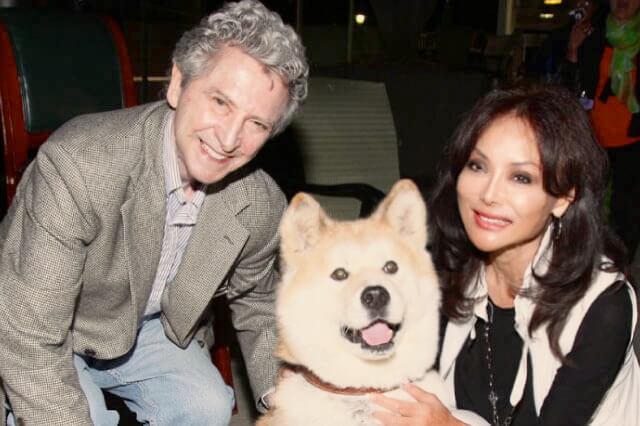 A beloved and heart warming story, “Hachi: A Dog’s Tale” portrays the incredible love and loyalty between man and dog. Producer Vicki Shigekuni Wong delves into some of the story behind the scenes of making this touching movie.

The real-life dog, named Layla, who played Hachi in the movie and her owner/trainer, David Allsberry, joined the event for a photo session with each of the 150+ guests. Producers of the movie, Vicki Shigekuni Wong and Paul Mason, were featured to offer commentaries and answer questions from the audience.

Q: What was your inspiration for creating the movie: Hachi, A Dog’s Tale?

A: I first saw Hachiko’s bronze statue while visiting Tokyo more than 25 years ago. When I learned the story of the loyal dog of 1930’s Japan, it struck deep emotions in me, and I adopted a Japanese Shiba dog upon my return. I named him Hachi. It was Christmas, he had a red bow around his neck and he was so serene for a puppy. I fell in love, and our deep bond continued for 16 years. We were inseparable. When I traveled, he stayed with my parents who considered Hachi their “grand dog.”

Once I stayed with a friend at his lovely St. Paul de Vence home in France, and was being urged to stay longer. I had been away for a week, and had promised to be back to care for Hachi. My dear friend joked about it for years. He was aced out by a dog!

Hachi had such a calm spirit, and I’d call him Buddha sometimes. I really was in awe of his dignified being, and the grace I felt in his presence. Any issues of my busy and sometimes complex life really paled when I was with Hachi. He had this quiet power that emanated from his soul.

When Hachi passed away, even though his physical body was gone, his spiritual energy was very much alive. It was incredible. The deep affection we shared over the years continued to illuminate my days and nights.

When I met Paul Mason, a respected TV/film producer of more than 40 years, I shared the story of the beloved Japanese dog and how it impacted my life. At the time, Paul was not a dog person, but I was passionate about my belief in this tender love story. He finally agreed to mentor me through the film process, and that’s how it all began.

Q: How did you and Paul approach Richard Gere to not only star in the film, but to co-produce with you?

A: The first person that popped in my head was Richard Gere. I knew of his deep respect for Japanese culture. I was asked for alternative choices. I had none.

Richard’s agent read the script and loved it. He warned Richard that his character dies midway and the dog was the star. As Richard tells it, he had a deep response from the start. He would tell people about the story, and become quite emotional.

That’s how Richard Gere became attached to the film, not only as the star, but as my co-producer, as well. He had an intense visceral feeling about Hachi’s story. During the production, Richard and our director, Lasse Hallstrom, were hands on, all the way, and he was a joy to work with throughout.

Q: What message would you most like to convey to someone after he or she has watched the movie?

A: The compelling reason for making this film was to share the intense connection between man and dog. For dog lovers, this simply confirmed what they already felt. But, for those with different backgrounds, this was novel – the idea that dogs have emotions and, even beyond that, a profound emotional intelligence that defies explanation until you experience it.

Quite a few of the details in the film came from experiences with my Hachi. The fact that dogs can grieve as humans do was important to share with the audience.

Q: Tell us a little about your mother’s connection to JAS from many years ago, and how that might inspire you to become more involved with JAS.

A: My parents were very involved in JAS during the earlier years, and I recall all the interesting events and people they would talk about back then. They have always been at the heart of the Japanese American community.

My father, Thomas Shigekuni, had a primarily Japanese-American law practice for more than 45 years. He helped set up some of the early Japanese companies, such as Sega, here in the U.S., and promoted ideas and acts that increased respect and equality for those of Japanese ancestry.

Ruth, my mother, was raised in Oklahoma City and was always the spark plug of the family. Similar to my grandmother (Oklahoma City’s Woman of the Year), she is very social and enjoys meeting new people, discovering new places to visit, and is always steps ahead of everyone else.

Through JAS, my mother was able to expand her circle of friends, while having lots of fun whale watching, viewing exhibitions, attending special events and essentially supporting the organization that was founded on maintaining close relations with Japan.

Unlike my parents, I never really was involved in my Japanese heritage until the making of “Hachi: A Dog’s Tale.” It was only after I visited Tokyo to discuss the project with Shochiku (the film production and distribution company) that I got to know Japanese on a personal level.

I had always believed that the Japanese corporate structure was remote somehow. To my delight, nothing could be further from the truth. Through my film, I’ve met exceptional individuals, such as Misako Ito, director of the Japan Foundation Los Angeles, and the charming Consul General of Japan, Jun Niimi, the marvelous diplomat who works tirelessly to share the Japanese culture of dignity, passion and honor.

The JAS is the best way to gain access to this active community, and I plan on spending more time on this myself in the near future.