Who says animals don’t express emotion?  Just because we can’t always understand just what our dogs are trying to tell us doesn’t mean they don’t feel much of the same things we do. So do dogs express emotions? Of course!

This video of Bella the dog and Beavis the beaver has been viewed on YouTube over a million times and is hard proof dogs express emotions.

Before Beavis passed away, he and Bella were inseparable. They ate together, played together, and even shared living quarters. Beavis passed away in 2012, but the pair’s story resurfaced after a video that the owner shot of the two appeared on Reddit.

In the heartbreaking video, as Bella realizes that her friend is not coming to life, she whimpers, nuzzles, and licks her friend as if trying to say goodbye. 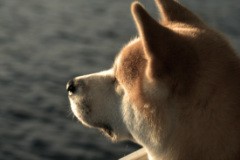 Dogs Express Emotions in So Many Ways

My dog Hachi had a “crush” on my parents elderly cat named Misty. For years, Hachi would tentatively try to approach Misty – only to be rebuffed by a loud hiss and a fierce stare. When Misty died, she was buried in the backyard with a simple ceremony.

After the burial, Hachi began whimpering and digging frantically at the soil. For days, he wouldn’t leave the site. Dogs express emotions so clearly through their behavior, just like Hachi did for Misty.

Unlike Bella and her beaver friend, Hachi never got the chance to show his devotion to Misty… until the very end.

Our animals deserve far more credit than we give them. Dogs express emotions more than us humans even realize. Do you have a cute story of your dog or pet showing adroable, affectionate emotions or maybe even funny ones?

Subscribe (Get notified of new replies)
newest oldest most voted

i fells sad for him

Everybody needs a secret hideaway...do you have a

One of my favorite spots is walking down the steep

When my Hachi passed away, I created this memorial

Layla (one of 3 Akitas who played Hachi) and Richa

Every year, for 16 years... I celebrated Hachi’s